When one has lots and lots of money one can more or less indulge themselves into things that are beyond the means of ordinary folks things like homes for example. It is obvious to everyone that most, if not all of the world most expensive homes belong to billionaires. It seems to be a “requirement” of sorts that any rich person, regardless of whether they are a billionaire or not that they should have the most expensive home that is larger, grander and opulent compared to normal homes.

The nice thing about billion-dollar price tagged homes is that they are not in any scary or creepy places.

Each home is located in city areas, business districts or in a rural area and these billionaire’s sure like their homes big, opulent and functional sometimes. Some of the homes are built and paid for by their rich billionaire owners. Others belonged to other billionaires and were sold to another billionaire who happens to fancy the house and property the former has built.

Here are some of the World Most Expensive Homes

Sometimes called London’s most exclusive address the place is lined trees giving it that is in the middle of a forest or woods. Found in what is named “Billionaires Row”, the street that has both residential and ambassadorial houses. Britain’s intelligence agency MI19 used to have a headquarters here during WWII and the Cold War. For one of the world most expensive homes it is surrounded by lots of heavy security due to the ambassadorial residence in the place.

You can find 3 swimming pools, 29 bedrooms and 39 baths within the place. But it has one other feature that you don’t normally find in some of the world most expensive homes: a power plant right on its premises. The power plant’s building cost may be high, but there is no doubt that it allows Ira Rennert to save more money since he has no electric bills to pay.

This was built by King Leopold II and it is said to be one of the many waterside homes for his numerous mistresses. Another billionaire from Russia Mikhail Prokhorov tried to buy the place, but the deal never came through. As a result, Mikhail Prokhorov forfeited a deposit he made that was worth 50 million euro. You win some and lose as the old saying goes.

This 27-storied home has 6 levels of parking space located underground, helicopter pads for 3, a healthy level of sorts and needs to be run by a staff of 600 people. The 400,000 square foot home is named after a mythical island of the same name that was said to be lost in the Atlantic Ocean. You can be sure that the Antilia that is one of the world most expensive homes won’t suffer that fate. 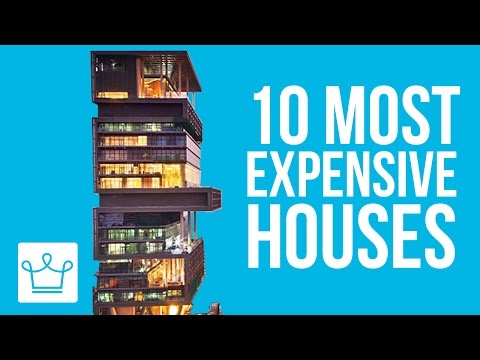